Pamela Fletcher, “On the Rise of the Commercial Art Gallery in London”

The modern commercial art gallery emerged as a distinct institutional form in the middle years of the nineteenth century, profoundly changing the physical, economic and social relationships between artists, dealers, art objects, and viewers.

If you wanted to purchase a painting by a contemporary artist in London in 1789, you might have perused the annual exhibitions of the

Royal Academy or other exhibition societies, or commissioned a work of art directly from the artist. You might also have examined a dealer’s stock, though art dealers at this time tended to sell imported Old Masters rather than the work of living British artists (Pears; Westgarth). If you wanted to purchase a painting by a contemporary artist in London in 1910, you still had all these options but you would most likely have visited a commercial gallery, a retail space exclusively dedicated to the display and sale of fine art. Over the course of the long nineteenth century, the commercial art gallery assumed its recognizably modern form: a permanent retail space with regular hours, which was associated with a dealer of acknowledged expertise, hosted a regular schedule of well-publicized temporary exhibitions, and was identified with a distinct specialization or brand. These attributes, however, emerged gradually and in an uneven pattern, only slowly consolidating into the form of the modern commercial art gallery. How, then, can the gradual emergence of a type be mapped onto the history of a timeline? On the one hand, it seems impoverishing even to attempt to do so: any instance the historian points to as the “first” example of something can be trumped by another historian’s claim to having found an earlier example. On the other hand, in 1789 there was no such thing as a commercial art gallery in London, and in 1910 there were hundreds of them.

In this essay, I will explore the emergence and rise of the institutional form of the commercial art gallery through a set of three events that mark significant milestones in this process in the middle decades of the nineteenth century. Such a “timeline” could be extended, of course, beyond the boundaries of the long nineteenth century. Important precursors to the commercial gallery include artists’ exhibition societies that hosted annual shows, art and antiquity dealers, and print sellers and other retail traders who also exhibited paintings. And the twentieth and twenty-first centuries have given us the ideal of the gallery as “white cube” and the rise of the international art fair and biennial, all of which have made critical changes to the very concept of the commercial gallery. But in the middle years of the nineteenth century, a broad base of art consumers, an emerging set of new retail practices, an active periodical press, and a relative glut of artists and art works combined to create the conditions in which the recognizably modern form of the commercial art gallery came to be a viable, even necessary, part of the art market. 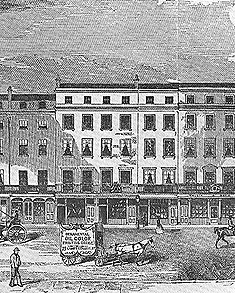 121 Pall Mall. (See Fig. 1.) Gambart had begun his career as a print seller, and his early exhibitions in London followed the standard model of exhibiting a painting in order to publicize and sell reproductive engravings. At mid-century, however, he and other print sellers began to visibly separate the print business from the sale of paintings, hosting art exhibitions in dedicated spaces removed from the reproductive engravings that were still the major source of their profits. The challenge for these early spaces was to carve out a reputable niche for the sale of art, distinct from the sphere of the itinerant traders and dishonest dealers that formed the common perception of the art trade. Gambart’s first annual French Exhibition was a key moment in this history, as he worked to combine the legitimizing norms of the Academy’s annual exhibition with the emerging standards of retail practice. The French Exhibition featured works of Continental art and opened at roughly the same time as the Royal Academy exhibition of contemporary British art. Gambart also followed the Academy’s lead in charging a shilling admission fee, and the exhibition itself was identified in the catalogue as the work of a “Visiting Committee” of organizers rather than as the speculation of an art dealer. The strategy worked, as Gambart’s exhibition—and those that followed in the space—quickly overcame many critics’ objections to reviewing dealers’ shows, receiving regular and favorable press attention. By 1857, the space was known as the French Gallery, hosting a regular and continual series of temporary exhibitions and doing a roaring trade in picture sales (Maas; Fletcher). Other print sellers and art dealers quickly followed Gambart’s lead, establishing retail premises with regular schedules of fine art exhibitions, and the institutional form of the commercial art gallery began to take shape. 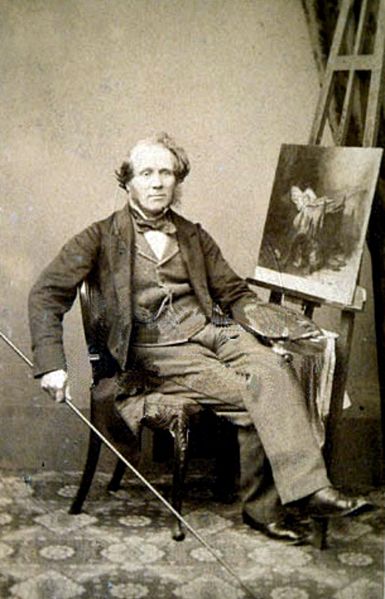 In 1862, the wildly popular artist William Powell Frith surprised and angered the art establishment by exhibiting his long awaited painting The Railway Station with a private art dealer rather than at the Royal Academy. By the early 1860s, art galleries had become both more common and more influential, but the Academy remained the dominant exhibition venue in London in terms of prestige and publicity. Most artists aimed to send their most important pictures to the annual Academy, which only accepted works that had not yet been exhibited elsewhere. Indeed, many aspiring artists shunned dealers’ offers for fear of incurring the Academy’s disapproval. In the 1850s, for example, John Everett Millais refused to send original work to dealers “so long as any doubt remained as to the attitude of the Academy,” to which he hoped to be elected an Associate (Millais 216). But the lure of the market was strong. Frith had been made a Royal Academician in 1852, and went on to draw huge crowds (and door receipts) at the Academy with his modern-life paintings Life at the Seaside (1854) and Derby Day (1858). In 1862, however, he was willing to risk the Academy’s displeasure by exhibiting his next major work with the dealer Louis Victor Flatou. The dealer’s original commission stipulated that Frith would be paid £4,500 for the painting, sketches, and engraving rights, and gave him permission to exhibit the picture at the Academy first. The artist later gave up this right for an additional £750, a sum that both quantifies Frith’s estimate of the value of the Academy’s prestige, and indicates how confident the dealer was that he would recoup his costs (Frith 229-30). The painting was an immense success, attracting a reported 80,000 paying visitors in its first months on view (“Minor Topics”) and widespread press coverage. Newspaper accounts often began with a discussion of the immense sum Flatou had paid Frith, opening up a wide-ranging public discussion of the changing economics of the art market. For many critics, commercial and artistic success seemed mutually exclusive; as one reviewer complained, “the very fact that such elements of popularity were essential to its financial success somewhat periled its character in an artistic sense” (“Life at a Railway Station” 122). Yet Frith’s decision arguably marked a turning point in how artists structured their careers, as the financial rewards of the commercial realm began to outweigh the advantages of Academic recognition.

In 1867, the Royal Academy officially decided to move from

Burlington House, holding the first annual exhibition in its new home in summer 1869. Almost as soon as the announcement was made, galleries that had clustered around Trafalgar Square and Pall Mall began to contemplate following suit. Once again, Gambart was a pioneer. In 1867, he sold the lease of the French Gallery to his manager Henry Wallis and moved his business to 22 Albemarle Street, near Burlington House. Over the course of the 1870s, Dickinson’s Gallery, the Doré Gallery, the Belgian Gallery, the Fine Art Society, L’Art Gallery, the Marine Picture Gallery, the Grosvenor Gallery, and Agnew’s all opened premises on

Bond Street, the heart of the luxury retail market. As the Goupil Gallery announced as they moved to the area in 1883, they “had long felt that the situation of their late Galleries [in

the Strand] has been found too inconvenient to allow of their seeing their patrons so often as they would desire, and they trust that . . . their removal to the most famous of West-end thoroughfares, will insure to them . . . more frequent visits from their present numerous amateurs” (The Year’s Art 1883 5). These new spaces were grandly designed and elegantly appointed, aiming to attract a fashionable and wealthy clientele (Denney; Helmreich). As Henry James wryly noted about the fashionable

Grosvenor Gallery, “[i]n so far as his [Sir Coutts Lindsay, the proprietor] beautiful rooms in Bond Street are a commercial speculation, this side of their character has been gilded over, and dissimulated in the most graceful manner” (139). By the 1880s, the landscape of the gallery system had been firmly established in the West End, fostering a gallery culture of luxury and display.

By the early years of the twentieth century, the Academy was widely seen to have lost its preeminent place in the art market, increasingly supplanted both economically and culturally by the gallery system. This was a change with profound effects for the relationships between artist, dealer, art object, and audience. The commercial art gallery provided new financial opportunities and challenges for artists and dealers and new kinds of physical and social spaces for viewers’ engagement with art (Fletcher and Helmreich). Over the twentieth and twenty-first centuries, the gallery system proved to be a resilient and adaptive form, evolving new standards of interior design, re-mapping the cultural geography of the urban art market, and adopting new marketing techniques in response to new forms of art and emerging audiences and technologies. Yet through all of these changes, the primary innovation of the 1850s and 1860s—the creation of a dedicated retail space managed by a professional dealer and hosting a series of rotating exhibitions—has endured as the entirely familiar form of the commercial art gallery.

Pamela Fletcher is Associate Professor of Art History at Bowdoin College. She is the author of Narrating Modernity: The British Problem Picture 1895-1914 (Ashgate, 2003) and co-editor (with Anne Helmreich) of The Rise of the Modern Art Market in London 1850-1939 (Manchester University Press, 2011). Her work on the commercial art gallery has appeared in Victorian Periodicals Review, Visual Culture in Britain, and Nineteenth-Century Art Worldwide.

Fletcher, Pamela. “On the Rise of the Commercial Art Gallery in London.” BRANCH: Britain, Representation and Nineteenth-Century History. Ed. Dino Franco Felluga. Extension of Romanticism and Victorianism on the Net. Web. [Here, add your last date of access to BRANCH].

Nicholas Frankel, “On the Whistler-Ruskin Trial, 1878″

Anne Helmreich, “On the Opening of the Crystal Palace at Sydenham, 1854″

Audrey Jaffe, “On the Great Exhibition”

Aviva Briefel, “On the 1886 Colonial and Indian Exhibition”

Amy Woodson-Boulton, “The City Art Museum Movement and the Social Role of Art”