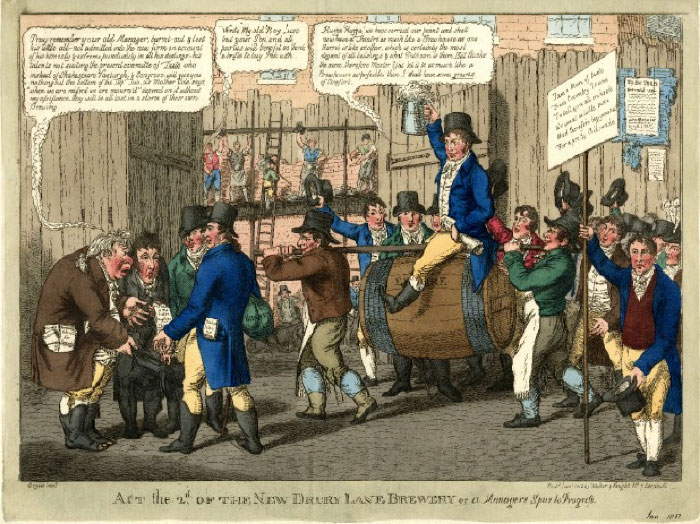 Charles Williams, Act the 2.d of the New Drury Lane Brewery or a Managers Spur to Progress (January 1812). At the center of the image, Samuel Whitbread hoists an eponymous tankard in his right hand and sits atop a large cask marked “En[t]ire,” which is carried by two draymen. In his left hand, Whitbread grasps the new Theatre “Pat[en]t” and cries out, “Huzza! Huzza! we have carried our point and shall now have a Theatre as much like a Brewhouse as one Barrel is like another, which is certainly the most elegant of all buildings & what Publican is there But thinks the same, therefore Master Yat [Wyatt] let it be as much like a Brewhouse as possible, then I shall have some grains of Comfort.” Among other figures is Sheridan, in profile on the far left, with toes protruding through his boots and manuscripts spilling out of his pocket—the latter marked with names of his dramas The School for Scandal, The Duenna, and The Rivals. In hopes of charity from the Duke of Bedford, he holds out his hat and pleads, “Pray remember your old Manager, burnt-out & lost his little all—not admitted into the new firm on account of his honesty & extreme punctuality in all his dealings—his talents not suiting the present committe [sic] of Taste who instead of Shakespeare, Vanburgh, & Congreve, will give you nothing but the bottom of the Tap Tub. as Mother Cole [in Samuel Foote’s drama The Minor] says ‘when we are missed we are mourn’d’ depend on it without my assistance they will be all lost in a storm of their own Brewing.” Courtesy of the British Museum.