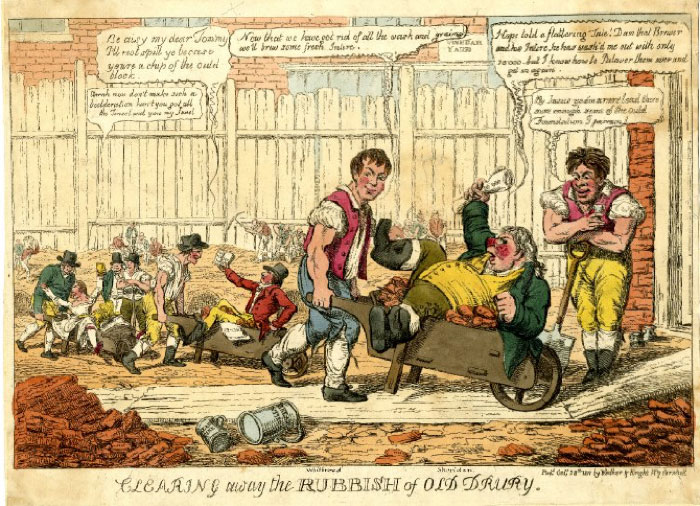 Charles Williams, Clearing away the Rubbish of Old Drury (28 October 1811). A bloated, grizzled, and rhinophymic-nosed Sheridan lies in a wheelbarrow pushed by Samuel Whitbread (dressed in worker’s clothes) who exclaims, “Now that we have got rid of all the wash and grains we’ll brew some fresh Intire.” Whitbread was the only son of Samuel Whitbread (1720-1796), English politician and brewer, who established a brewery that in 1799 became Whitbread & Co. Ltd. It is this lucrative legacy, from which the younger Whitbread benefited, that Williams plays upon here, as indicated further in the two silver tankards labeled “Whitbreads Intire.” “Intire” was an early synonym for porter; it was coined “entire” from its being drawn direct from a single cask, rather than being a mixture of more than one product. In the foreground, Sheridan holds in his hand a paper inscribed “20’000,” the near amount he received for his share in the Theatre, and complains, “Hope told a flattering Tale! Dam that Brewer and his Intire, he has wash’d me out with only 20’000. but I Know how to Palaver them over and get in again.” His son Tom is being carried away in a wheelbarrow with a note attached to it for “12,000”; the man pushing him says, “Be aisy my dear Tommy I’ll not spill ye becase ye are a chip of the ould block.” To the right, a laborer leans on his shovel and remarks to the man lugging Sheridan, “By Jasus you’ve a rare load there sure enough some of the Ould Foundation I parceave!”. Courtesy of the British Museum.