The Chartists sought universal male suffrage because they regarded parliamentary legislation the principal means of enacting social reform. Precisely because they did not possess the right to vote, however, they had to employ alternative forms of action. This led to debates within the movement about whether they should seek to obtain the vote through persuasion—moral force—or though insurrection—physical force. The newspaper press representing the governing elites not only condemned the threat of physical force as unconstitutional, but also depicted moral force as essentially violent and therefore illegitimate. In response, the Chartist press produced a rhetoric representing physical force as a moral right in the face of an illegitimate governing elite. However, the effectiveness of this rhetoric depended on a strategy of indefinitely deferring the use of physical force, the shortcomings of which were manifested in the aftermath of the rejection of the Chartist petitions of 1839 and 1842.

The “People’s Charter” sought to provide parliamentary representation to all adult males in Britain at a time when only one out of six adult males were eligible to vote. It sought to eliminate the property qualification, which effectively excluded the working classes from the franchise, and proposed a set of reforms—the secret ballot, eliminating property qualifications for Members of Parliament, paying a salary to M. P.s, making constituencies equal in size, and mandating annual elections—that would make parliamentary representation more egalitarian. As Gareth Stedman Jones has shown, in the early nineteenth century political discourse dictated that the only legitimate means of social change was the constitutional channel of parliamentary legislation (96-106). The advocates of the Charter thus were faced with a paradoxical dilemma. The only legitimate means of obtaining the right to vote was through legislation, but because they did not yet possess the vote they did not possess the means of electing parliamentary representatives who would grant them that right.

This circumstance led the Chartists to debate the merits of employing “moral force” and “physical force” as means of obtaining the Charter. They could employ moral force by seeking to persuade Members of Parliament that justice, and the constitution, dictated that they should have parliamentary representation. The Charter itself, which took the form of a petition to Parliament, was the principle instrument of moral force. However, as the Chartists knew from the history of the First Reform Bill and from responses to the movement in the elite press, Parliament was likely to ignore these arguments. Indeed, although a tiny number of radical M. P.s supported the petition, the Tories and Whigs united in lopsided votes against consideration of it (235 to 46 in 1839, 287 to 49 in 1842). From the beginning, therefore, the Chartists debated employing a range of “ulterior measures” that included economic boycotts, strikes, mass meetings, and the direct use of “physical force” in insurrection. While Chartist rhetoric sought to make moral arguments for physical force so as to legitimate the campaign for the franchise, the elite press, speaking for the parliamentary parties, construed even the most peaceful of these activities, even moral-force persuasion, as illegitimate and a threat to the constitution.[1] There were, of course, a range of positions on both sides. The Chartists were often divided over questions about the role of physical force in their movement, and the Whigs and Tories each claimed to be better equipped to deal with Chartism. Nonetheless, the Whigs and Tories were united in the way they depicted Chartism, and Chartists of various stripes claimed a historical and constitutional sanction for their demands.

The newspapers that supported the Whigs and Tories—the governing elite that controlled Parliament—contended that in spite of the claim that they sought constitutional reform, the Chartists really sought revolutionary changes that would destroy the British constitution, in short that “‘revolution,’ not ‘reform,’ is the object in view” (Morning Chronicle 23 Apr. 1841: 2). The Times, for example, demanded that the government suppress the “democratic revolutionists” who were “assault[ing] the constitution” (12 Apr. 1839: 4; see 25 Sept. 1838: 3), and the Morning Post, which similarly deplored the Chartists’ “revolutionary violence,” described the movement as a confederacy “organised for the avowed purpose of destroying every vestige of the British Constitution” (18 Oct. 1838: 2; 15 Sept 1838: 2; 28 Sept. 1838: 2). Even the relatively liberal Examiner contended that by engaging in activities that it construed as illegal and unconstitutional, the Chartists had manifested their “absolute unfitness for the franchise” (17 Sept. 1842: 593).

The papers consequently treated even moral-force activities as forms of physical force or revolutionary violence. Reports on what were generally peaceful demonstrations frequently depicted Chartist oratory as “violent,” “inflammatory” or “incendiary,” a choice of words that conflates speech that is impassioned or vehement in tone with speech that urges its audience to violent action. The Times, for example, deplored the Chartists’ use of “violent and inflammatory language” (29 Apr. 1839: 5; see 29 Mar. 1839: 6) and the Morning Post criticized the “inflammatory manifesto against life and property” issued by the National Convention (19 Mar. 1839: 4), while the Morning Chronicle described a Chartist orator as addressing a “meeting in the usual violent and inflammatory language” (30 Apr. 1839: 3). 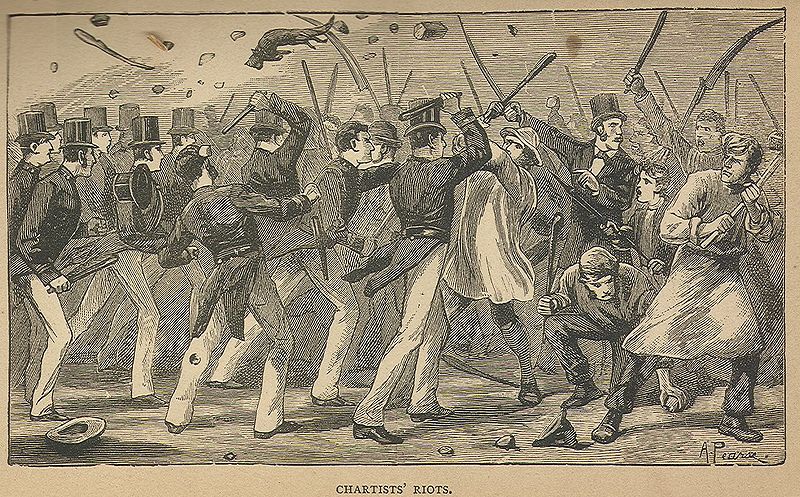 Whereas the parliamentary press portrayed moral force as merely a disguise for physical force and revolution, the Chartist press portrayed its repertoire of supplemental strategies, including physical force, as working in the service of moral-force reform. The Chartists contended that in demanding universal suffrage they were seeking to restore the constitution, not to overthrow it, that “the people’s” right to the suffrage was “formerly part of the Constitution,” but had been gradually stripped away and that their aim was to see “the Constitution restored to its purity.”[2] In a characteristic move, The Charter inverted the claims of the parliamentary press by describing these encroachments on universal suffrage as an “unconstitutional . . . usurpation” on the part of the parliamentary parties themselves (28 April 1839: 213); they alleged, that is, that it was the governing elite, not themselves, that threatened the constitution.

The Chartists similarly developed, and legitimated, the tactics they employed—notably the right to petition the government, the right of assembly, and the right to bear arms in self-defense—as constitutionally sanctioned forms of action.[3] As Charles Tilly has shown, the rights to assemble and petition had become so well established that the government generally acknowledged them, but the same could not be said for the right to bear arms, which the elite press depicted as preparation for revolutionary insurrection (12-14, 60-61, 308-10). The Chartists insisted, however, that they would take up arms only in self-defense, whether it be defense from a government attack on one of their mass meetings or defense of the constitutional right of parliamentary representation itself. In this respect, they could construe their entire repertoire of contention as constitutional, and thus moral, even though it sometimes involved the use, or at least the threat, of physical force.

Most significantly, Chartist discourse made physical force moral by treating it as something that never actually happens, an unrealized potentiality held in check while moral force acts. The mass demonstration itself employed this strategy, as an editorial describing the

Kersal Moor meeting as a “moral demonstration of physical strength” indicates (Northern Star 1 June 1839: 4). While the meetings themselves were peaceful, constitutional and thus “moral,” the gathering of a massive crowd simultaneously demonstrated the potential for physical force. We can see this conception of physical force as a potentiality that acts without being activated in a Northern Star editorial that both advises its readers that they will be “irresistible if they do not damage their own cause by premature violence” and encourages them to arm in self-defense (11 May 1839: 4; emphasis added).

As this passage indicates, in order to imagine moral force as effective, Chartist rhetoric expressed a willingness to employ physical force, but at the same time postponed it to the future, hence their widely used slogan, “peacably if we may, forcibly if we must” (e. g. Northern Star April 6, 1839: 6). Feargus O’Connor’s speeches often blurred the line between moral and physical force precisely by claiming that the Chartists would be compelled to use force in the future if Parliament did not act in the present. In one such speech, he began by contending that “there was no man among them who was not satisfied to trust the moral power of the nation, even to downbending, even to submission” rather than “rush into maddening conflict,” but went on to insist that “when the moral strength was expended . . . then . . . if wrong should come from any party, cursed be that virtuous man who refused to meet force by force” (Northern Star 11 Aug. 1838: 6; see 22 Sept. 1838, 2-3, 19 Jan. 1839: 4.). In sum, these rhetorical strategies sought to make moral force effective by raising the specter of physical force, even as they sought to moralize physical force by indefinitely deferring its use.

The shortcomings of the Chartist strategy manifested themselves in their attempts to use “ulterior measures” during these years. In 1839, they planned to respond to the rejection of the first petition with a national strike to be called the “Sacred Month.” However, as the date for the strike approached they became worried that it would not garner sufficient support, and decided first to reduce the month to three days and then to substitute for it a “grand moral demonstration.” If, on the one hand, treating physical force as a tactic to be used only when moral force fails enabled them to moralize the threat of force, on the other hand, it meant that it must always be deferred to the future. As Feargus O’Connor put it when arguing for delaying the strike, if they “played the card and lost it” would “they have any other card to play?” (Chase 86). Indeed, in spite of the fact that some Chartists gathered arms and conducted military drills while others argued that only insurrection would produce results, there was very little Chartist violence.

In the autumn of 1839, a few months after the rejection of the first Chartist petition, 9,000 laborers—some of them ignorant of the intentions of their leaders—marched into Newport with the plan of taking control of the town, but were quickly routed by local forces. Three years later, following the rejection of the second petition, the Chartists sought to join forces with striking workers in the industrial region around

Manchester, but once again government forces moved quickly to suppress the ensuing riots. There are many reasons why these uprisings failed to gain traction, not least of which was that the government possessed well organized and equipped military forces. For all the reports of arming and drilling, there is no evidence that the Chartists ever did much in the way of preparing themselves to employ physical force. What they did accomplish, however, was to develop a highly effective repertoire of moral-force tactics that have been taken up by many subaltern groups since, from their own later petition of 1848 to the American civil rights movement and the Arab spring (see Tilly, Tarrow).

Chris R. Vanden Bossche, Professor of English, University of Notre Dame is the author of Carlyle and the Search for Authority and editor of Carlyle’s Historical Essays and Past and Present as well as articles on a range of topics in Victorian studies.

[1] In my discussion of Chartist discourse, I draw primarily on the Northern Star—by far the most popular Chartist paper—and the Chartist. My discussion of the rhetoric of the governing elite focuses on four major London papers that spoke for it (the Times, the Morning Post, the Morning Chronicle, and the Examiner). These are the papers that the Chartist press most frequently cited as speaking for the elites, and, in turn, which often responded to the Chartist papers, in particular the Northern Star.