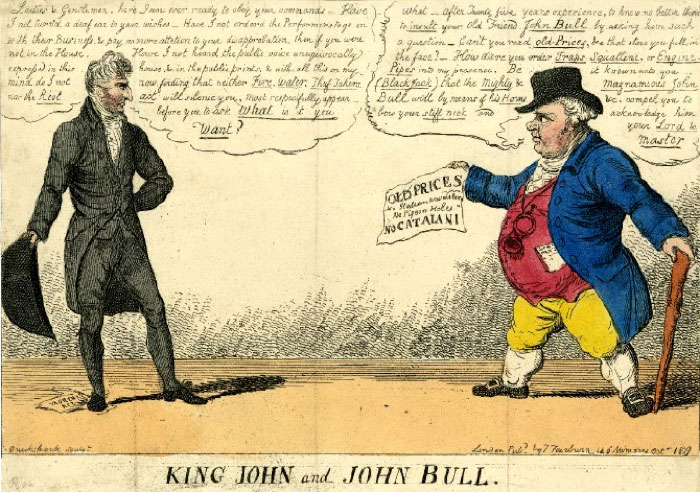 Isaac Cruikshank, King John and John Bull (October 1809). The image depicts an intransigent Kemble (left) facing a staunch John Bull (right), who shows Kemble a paper that reads: “OLD PRICES No Italian private Boxes No Pigeon Holes NO CATALANI.” Kemble, under whose left foot is on a paper labeled “Vagrant Act” says, “Ladies & Gentlemen, here I am ever ready to obey your commands—Have I not turn’d a deaf ear to your wishes—Have I not ordered the Performers to go on with their Business, & pay no more attetion to your disapprobation, then if you were not in the House—Have I not heard the public voice unequivocally express’d in this house, & in the public prints, & with all this on my mind do I not now, finding that neither Fire, Water, Theif Takers, nor the Riot act will silence you, Most respectfully appear before you to ask What is it you Want?” John Bull replies, “What—after Twenty five years experience, to know no better than to insult your Old Friend John Bull by asking him such a question—Can’t you read old Prices, &c that stare you full in the face?—How dare you order Traps Squallini [Catalani], or Engine-Pipes into my presence. Be it known unto you (Black Jack) that the Mighty & Magnamious John Bull will by means of his Horns &c, compel you to bow your stiff neck and acknowledge him your Lord & Master.” For information on the character of “King John,” see figure 20. Courtesy of the British Museum.