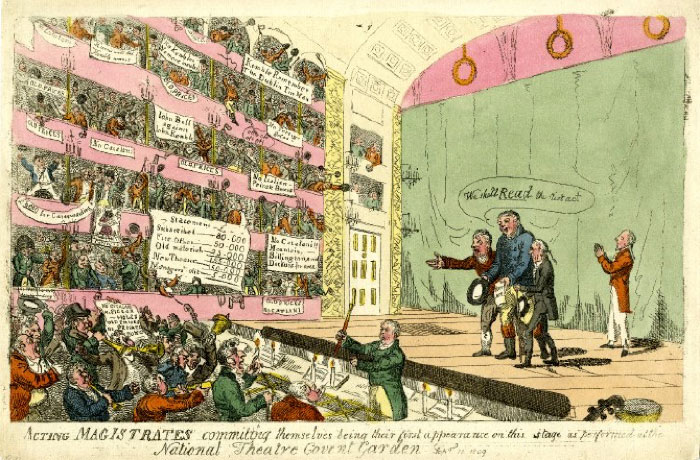 George and Isaac Cruikshank, Acting Magistrates committing themselves being their first appearance on this stage as performed at the National Theatre Covent Garden (18 September 1809). A raucous audience in the pit and boxes (as in figure 20) shout, blow trumpets, ring bells, twirl rattles, and display numerous signs with phrases such as “Old Prices,” “John Bull against John Kemble,” “No Italian Private Boxes,” and a large placard that reads:
Statement — £
Subscribed — 80-000
Fire Office — 50-000
Old Materials — 25-000
155-000
New Theatre — 150-000
Managers of it — 5-000
The numbers suggest that any financial shortfall incurred in the rebuilding of the Theatre (here, £5,000) should be met by the proprietors, not by the theatregoing public. On stage, one of the magistrates threatens, “We shall Read the riot act.” Behind them stands Kemble with his hands pressed together, either in praise of the three men, or in an appeal to the audience, or both. Courtesy of the British Museum.