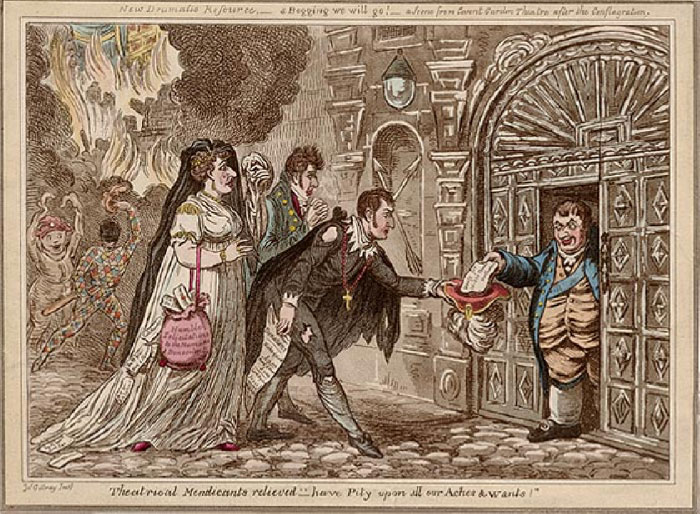 James Gillray, Theatrical Mendicants relieved—“have Pity upon all our Aches & Wants!” (15 January 1809). The title plays on Kemble’s much criticized pronunciation of the word “aches” with two syllables—as “aitches” and not as “aiks.” The text above the image says, “New Dramatic Resource—a Begging we will go!—a Scene from Covent Garden Theatre after the Conflagration.” The print depicts a crucifix-wearing Kemble, in the company of his brother Charles Kemble and his sister Sarah Siddons, wearing fashionable dress and begging from an obese Duke of Northumberland, who places into Kemble’s hat a “Draft for 10,000 Pounds [signed] Northumberland.” In Kemble’s right hand is a paper that reads, “Donations—Duke of Nord £10000 —Marqs of Abern £1000—Lord Egotist [Erskine] £1000—.” Siddons carries a large reticule on which is written, “Humble Solicitations to the Humane & Benevolent” out of which promissory notes project and fall to the ground and are inscribed, “‘the most Noble Marquiss of Abercorn’, ‘The Rt honb Lord Ego— Lord Mountjoy, Duke of —’, ‘The Right Honl Lord Castler[eagh]’, ‘His Roy[al Highness] the Prin[ce of Wales’].” A Harlequin and a zany or fool dance behind the three siblings, rejoice in the burning of the Theatre, the family’s pecuniary successes, or both. Courtesy of the British Museum.